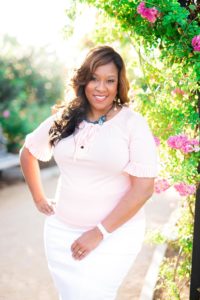 Keisha’s journey began in corporate America working as a civil engineer, but during the early stages of her young adulthood, she knew her keen eye for design along with her fascination for aesthetically transforming events needed an alternative platform. So, in 2007, Keisha’s Kreations was born and became her full-time profession.

Over the years, her expertise has been sought after from some of Houston’s top oil and gas companies down to NBA and NFL professional athletes, and as her clientele expands, so does her recognition.

Keisha’s insight and designs have been featured on KHOU 11, one of Houston’s leading local television stations as well as reputable wedding publications such as Grace Ormonde Wedding Style, The Knot and Weddings in Houston.

Her event design and production services have been contracted for Houston-based events that have attracted thousands of attendees including the 2013 All-Star Weekend and 2016 Houston Auto Show. Though she is well-known in the Houston area for her elegant and detailed designs, she has travelled intercontinentally and internationally to produce events enjoyed by spectators around the world.

Whenever she is not transforming events, she is transforming her community by serving as a tutor and teaching SAT and ACT prep classes. She is also a part of the Engineering Professions Mentorship Group where she helps shapes tomorrow’s future engineers while encouraging young women to excel in math, science and engineering related studies in order to decrease the disparity of women within these industries.

Keisha is incredible. We are very happy that we worked with her for our wedding. The creative table decor she put together was stunning, and the boutonnieres were truly unique.

She created incredible bouquets of herbs and oft-overlooked autumn florals, which were perfectly inline with my esthetic. And for all the fuss I made about not being interested in flowers, the memory of her vine and floral draping of the wedding chuppah, even now, weeks later, brings me to tears. It was all so much more beautiful than I could have possibly imagined.

I cannot get over how wonderful they are at Keisha’s Kreations. They did an AMAZING job on my wedding. Everything was simply gorgeous! Everyone at my wedding was gushing about the decor and flowers.

I would highly recommend them. They were professional in every task they accomplished. Shaunte kept me level-headed the entire time! Extremely grateful!

My first impression was exceptional. You can tell that customer service is first and that Keisha loves what she does and is very knowledgeable. I felt like royalty during my consultation. My fiance and I were given first-class treatment and were blown away by the presentation.